STUDIES OF THE IAHCRC CONSORTIUM

... Any study which has been approved by the Assembly, has been designed in compliance with the IAHCRC Questionnaires and according to the IAHCRC protocols, and is using the internal resources and services of the Consortium,  is considered a Study of the IAHCRC Consortium.
The member that proposed the Study is its Coordinator....

GENETICS-AHC Study
At the end of 2011, the research groups of the European Genetic Consortium for AHC in France, Italy and Holland joined the research group at the Duke University in USA to carry out the first collaborative research that led to the finding of the specific AHC-causing mutations of the ATP1A3 gene in most of the 105 screened patients (Heinzen at al., Nature Genetics, July 2012). Three patient  associations, in USA, France and Italy largely contributed to this research with their financial and logistical support.

GPC-AHC Study
In 2013 the Consortium launched the second collaborative study GPC-AHC, coordinated by Prof. Alexis Arzimanoglou and Doctor Eleni Panagiotakaki (University Hospitals of Lyon, France), aimed to identify possible correlations between the clinical phenotype associated with AHC and mutations in the ATP1A3 gene, with the goal to investigate whether different mutations can, in part, be responsible for the clinical heterogeneity observed in the disease.
The data were collected from the largest international cohort of AHC patients to date (155 patients), and the results of their analysis have been published in the Orphanet Journal of Rare Diseases (News, 01 October 2015).

ECG-AHC Study
The ECG-AHC Study of the heart disturbances in AHC, coordinated by Prof. Sanjay Sisodiya (University College of London, UK) and including 55 patients, has been published in the scientific journal BRAIN (Editorial Comment, 21 August 2015).

ECG2-ATP1A3 Study
As a follow-up, a second Study ECG2-ATP1A3 of the heart disturbances in AHC and all the ATP1A3 diseases was launched in September 2015, by the team of neurologists and cardiologists at UCL, coordinated by Prof. Sanjay Sisodiya and Dr. Simona BAlestrini. The complete neurological, genetic and cardiological data from more than 120 patients were collected by the reference centers of ten countries in Europe, USA and Australia. The study hase been published in the scientific journal NEUROLOGY  (Editorial Comment,  10 September 2020)

GEN2-AHC Study
The Study GEN2-AHC for the identification of the secondary gene(s) for AHC is still in progress, coordinated by Prof. Arn van den Maagdenberg (University Medical and Research Center of Leiden, The Netherlands) and by Prof. Erin Heinzen (IGM - Columbia University, New York, USA). More than 50 ATP1A3 negative patients have already been analyzed. The study has been completed and is now in publication.

OBSERV-AHC Study
The Study OBSERV-AHC, a Prospective Observational Natural History and Therapy Study on AHC,  has been definitively launched on September 2018 coordinated by Prof. Mohamad Mikati (Duke University, School of Medicine, Durham, NC, USA). The longitudinal data of about 100 patients are expected to be collected in the IAHCRC-CLOUD Platform by the  centers of four IAHCRC Nodes, in USA, France, Italy, Spain and UK. read the presentation

EEG-AHC Study
Launched in September 2020, the EEG-AHC Study is a qualitative and quantitative EEG study of sleep aimed to further understand the mechanisms of benefit of sleep in AHC, and of the sleep disorder in AHC and its association with epilepsy. It is an IAHCRC multicentric study collecting polysomnography and prolonged EEG data, including sleep and wakefulness, from all participating centres.
Dr. Simona Balestrini, at the IAHCRC member center of the University College of London, UK, is the Scientific Coordinator of the Study. read the presentation

QTc-AHC Study
Launched in September 2020, the QTc-AHC Study is a quantitative study that uses electrocardiogram (ECG) data to further understand the impact of AHC genotype in relation to cardiac repolarization, specifically the resetting electrical activity of the heart after a heartbeat. It is an IAHCRC multicentre study collecting ECG data, including medications and other relevant cardiac data, from all participating centers.
Dr. Andrew Landstrom, at the Duke University, USA, is the Scientific Coordinator of the Study. read the presentation

VARIA-ATP1A3 Study
Launched in March 2022, the VARIA-ATP1A3 Study focuses on the phenotypes correlated to the rarer variants in ATP1A3. In an extensive recent literature review almost 2/3 of individuals reported in the literature with ATP1A3-related conditions carry one of any eight ATP1A3 variants. For these variants there seems to be clear genotype/phenotype correlation. The aim of this Study is to investigate whether specific phenotypes can be delineated also for individuals carrying rarer ATP1A3 variants, as this would aid diagnosis and prognosis.
Dr. Aikaterini Vezyroglou, at the University College of London - Great Ormond Street Children Hospital, UK, is the Scientific Coordinator of the Study. read the presentation 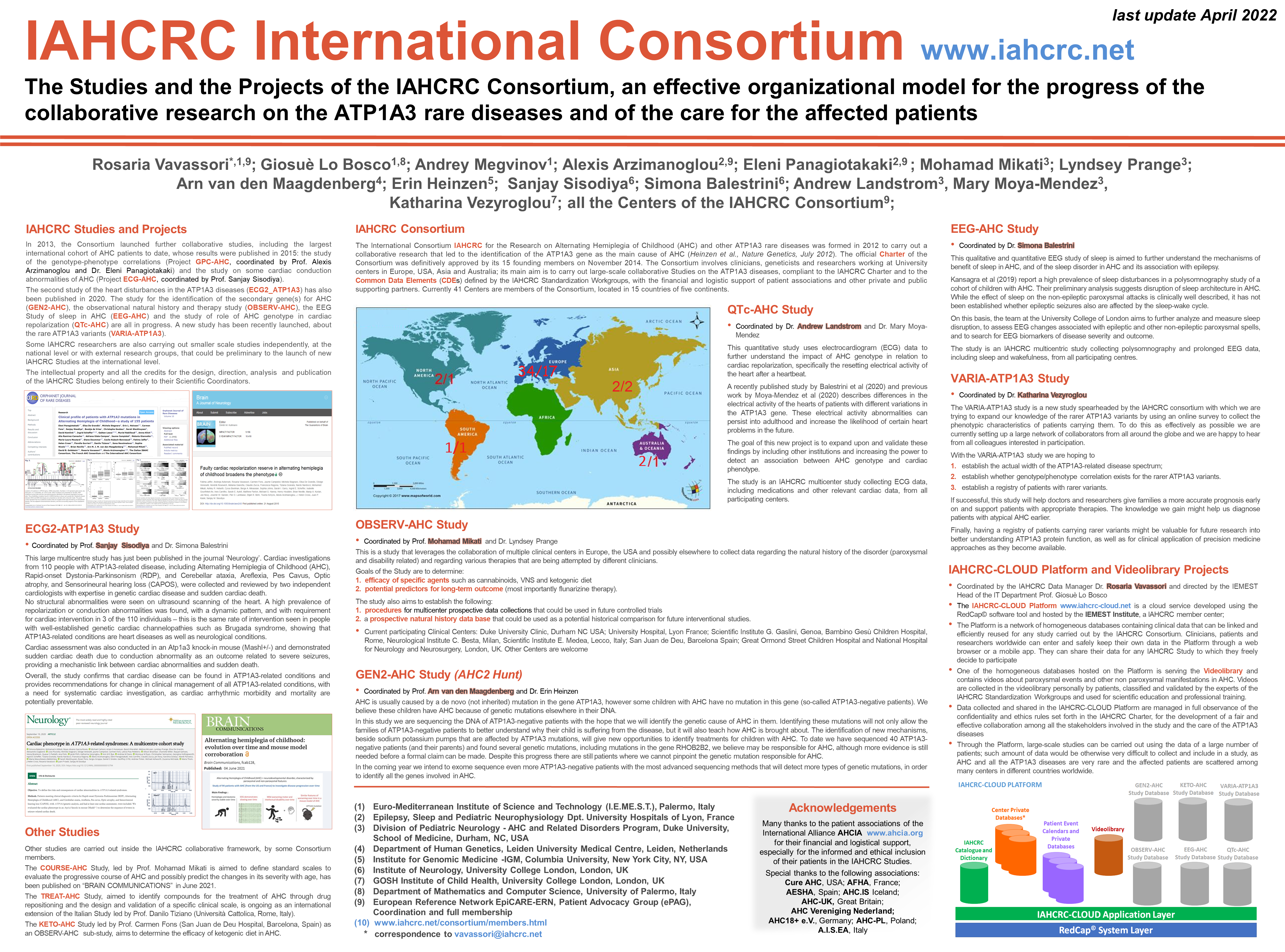 Past and Current Studies of the IAHCRC Consortium - April 2022 pdf